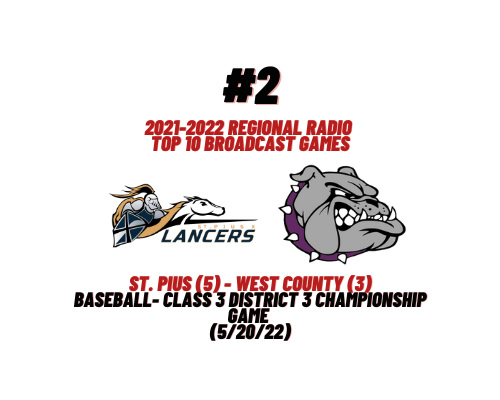 (Frankclay) We continue our series of features that look back at the top 10 games we broadcast during the 2021-2022 seasons on Regional Radio as voted on by our sports staff.

The third ranked, but second seeded St. Pius Lancers used a four-run, two-out rally in the top of the 7th to come back and beat the top-seed West County Bulldogs 5-3 in the Class 3 District 3 Championship game in May.

The comeback win for the Lancers ranks as our number two game of the 2021-22 season.

West County flooded the bases in the first inning as four of their first five hitters reached with a pair of singles and a pair of walks.

J.D. Whitter drove in West County’s first run with a bases load walk, but that was all the Bulldogs could manage in the first, just the single run.

Nolan Rawson scored both times. In the 4th Rawson was on the other end. He drove in Tycen Price to put West County out front 3-0.

In addition to being an offensive force for West County, J.D. Whitter’s real value came on the mound, where he was the Bulldog’s ace.

Whitter controlled the action for 6 and two thirds innings, but a pitch count rule forced him off the mound with only one out between the Bulldogs and a state playoff berth.

Whitter give up only one run and only two hits and drove in two of the Bulldogs three runs on the day when he stepped off the hill with a 3-1 lead.

Whitter walked only six batters and hit only four batters over 52 and two-thirds innings of work during the season, but four walks and a hit batsman in the district championship game may have used up the few precious extra pitches he needed to secure the win.

After a pitching change, a hit batsman put a runner in scoring position for St. Pius. Andrew Merseal singled and brought in a run to make it 3-2.

That’s when Austin Almany stepped in with two men on…

Tate Ramsey threw only the sixth inning, but earned the win for the Lancers.

West County loaded the bases in the bottom of the 7th, but Andrew Merseal secured the save.

Almany walked us through his game-winning three run blast.

St. Pius coach Dan Oliver tipped his cap to his opponent, but was glad to have Austin Almany on his side…

The win earned St. Pius its first district title since 2014 and earned the game the number two spot on our list of best games of the 2021-22 seasons.

Tune in Friday to find out which broadcast game earned top honors for the 2021-22 season on regional radio.