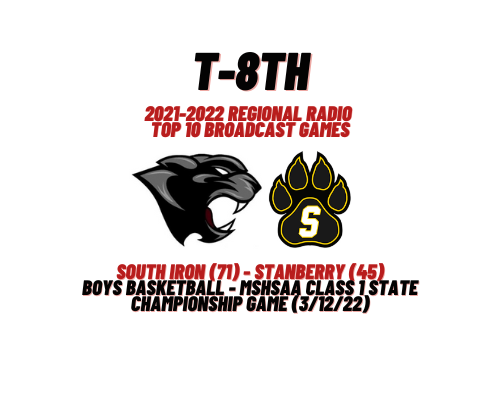 What made this game so special was the individual performance of the Class 1 Boys Basketball player of the year Drenin Dinkins. Dinkins tied a MSHSAA record for points in the first half of a state title game with 29.

This game is tied for 8th in our Regional Radio Top Ten Broadcast Games.

Before the basketball season started, Drenin Dinkins had one plan in mind, and that was to bring a state title back to Annapolis.

Dinkins and the South Iron Panthers delivered, Dinkins helped with one of the most dominant first halves in Missouri High School basketball. He had his stroke going early.

Then he really caught fire from beyond the arc.

Not even a fire extinguisher could cool off Drenin. He picked up in the second quarter right where he left off in the first. Getting buckets.

By halftime, Dinkins outscored the Bulldogs by nine points and the Panthers led 41-20. By the end, Dinkins finished with 34 points, 14 rebounds, and another state championship.

Coach Dusty Dinkins watched his son play a magnificent final game for him and his school.

The Panthers were never tested in the state playoffs outscoring their four opponents by an average of 27 points. Coach Dusty Dinkins hoped his guys were able to appreciate the setting.

With the back to back titles South Iron wins its third state championship in school history and finishes the season at 28-4.