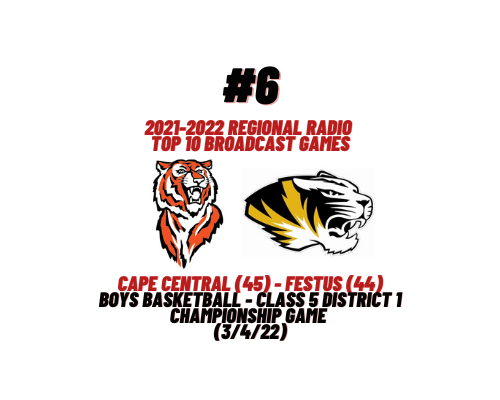 (DeSoto) We continue our series of features that look back at the top 10 games we broadcast during the 2021-2022 seasons on Regional Radio as voted on by our sports staff.

The Festus Tigers fell in the Class 5 District 1 basketball championship game on the night of Friday, March 4th.

But Festus came inches away from winning a classic against Cape Central in the number-6 game on our countdown.

On a night where defense dominated, Cape Central had the strong start, jumping out to a 9-1 lead.

Festus didn’t make a basket until the last 30 seconds of the first quarter and trailed 11-3 at the end of the opening period.

But the Tigers would rally behind their top backcourt players, senior Cole Rickermann and junior Arhmad Branch.

In total, Festus would close the first half on an 7-0 run, not only tying the game, but also taking the lead.

The start of the second half belonged to Cape Central.

By being on the wrong end of a 10-2 run, Festus would trail 29-22 heading into the final quarter of play.

The Cape Central lead would swell to start the fourth.

Facing their largest deficit of the night, it would be one of the senior stars that lead a quick and almost improbable turnaround for Festus.

Cole Rickermann scored 15 of his game-high 23 points in just the fourth quarter.

The game went back-and-forth down the home stretch.

Ultimately, Festus would have the ball down by one in the final minute.

The Tigers got the last shot.

One of the best seasons in school history ended for Festus with a record of 21-6.

All 5 starters for the Tigers earned all-conference honors.