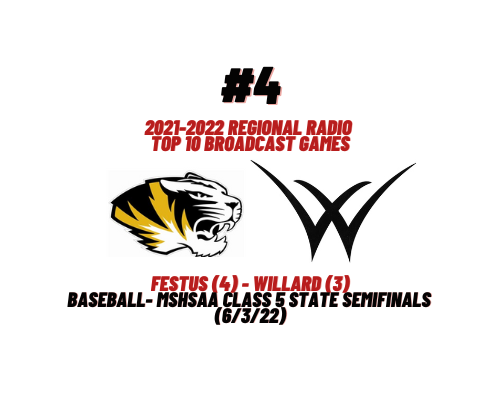 (Ozark) We continue our series of features that look back at the top 10 games we broadcast during the 2021-2022 seasons on Regional Radio as voted on by our sports staff.

As part of their trip to the baseball Final 4 this spring, the Festus Tigers won a game they’ll never forget in the Class 5 state semifinals, the number-four game on our countdown.

Taking on the number-one ranked team in the state was hard enough for Festus.

To make things more difficult, the Tigers’ opponent, Willard, was the defending state champion and was playing just a few miles from their campus in Springfield.

Festus made things even tougher when they spotted themselves an early deficit.

But the Tigers responded immediately.

Willard briefly took the lead back.

But the Tigers roared right back in the bottom half.

The game would stay even through there, thanks in particular to phenomenal Festus pitching.

And, when Schirmer hit his pitch limit, one of the Tigers’ junior aces stepped up big time in relief.

Nate Moore would be named the Applebee’s of Farmington Player of the Game.

It was not until extra innings that Festus finally broke through.

In the end, it came down to one pitch, and a Tiger senior literally walked it off.

One of the best seasons in program history continued as Festus won its 12th straight to improve to 27-8.

For just the second time in school history, the Tigers played in a baseball state championship game, which they lost to Platte County 6-0.