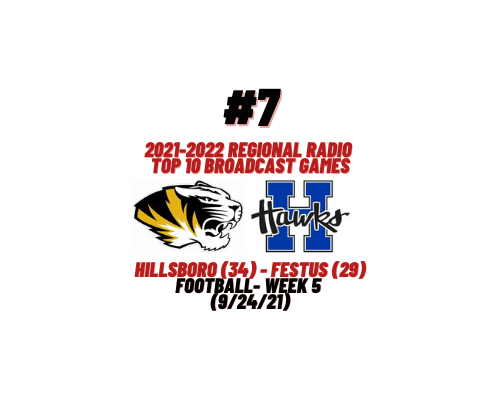 (Hillsboro) We continue our series of features that look back at the top 10 games we broadcast during the 2021-2022 seasons on Regional Radio as voted on by our sports staff.

One of the most thrilling games of the high school football season came on the night of Friday, September 24th.

It was a night fans of the Hillsboro Hawks and Festus Tigers will likely never forget.

And it’s the number-7 game on our countdown.

The defending champions of the MAFC Red Division faced off against perhaps their fiercest rival, with both teams looking to take over sole possession of first place in the conference.

Hillsboro was the team looking to return to championship glory, and the Hawks got the ball to begin the action and ran the ball at will in an opening scoring drive.

Festus punted on its opening drive, and Hillsboro was on the move before the Tigers made a huge defensive play.

A Festus offense known for big plays cashed in the turnover 2 plays later.

With the game tied heading into the second quarter, the Tigers turned from their aerial assault to the run game and senior Kaian Roberts-Day.

A 23-yard run highlighted a drive that Roberts-Day dominated on his way to the go-ahead score.

But Hillsboro’s run game would not be outshined, continuing to pound the rock behind star junior tailback Jaxin Patterson.

The game would be tied at 13 heading into halftime.

Festus got the ball to start the third quarter and was on the move before the Hawks defense made its mark.

The Hawks made big plays running the ball, but Festus kept countering with big pass plays.

Hillsboro kept wearing the Tiger defense down with the run game, but it wasn’t just Patterson getting into the end zone.

Festus would head into the fourth quarter turning again to the big-play combination of Cole Rickermann and Arhmad Branch.

The Tigers still trailed by two, but they got off the field and drove into the red zone before they turned to special teams and kicker Emily Holt.

But Hillsboro’s ferocious rushing attack would not be denied, and Patterson put his team back on top.

Patterson rushed for a total of 255 yards and 4 touchdowns.

Festus got the ball last and was in a position to win the game in the final minute.

But the Hawks found a way to survive.

Hillsboro improved to 2-0 in conference play.

The Hawks would go on to win the MAFC Red Division and reach a district champion game in a 9-2 season.

Festus would get more one more shot at Hillsboro.

The Tigers held a lead late in the Class 4 District 1 semifinals, but the Hawks ultimately won the game 13-7.

Festus’ season ended with a record of 6-5, with all 5 losses coming by a possession.