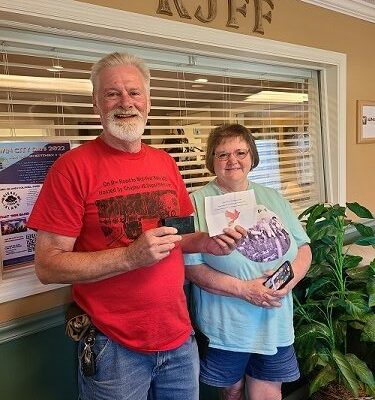 (Crystal City, Festus) The Hunt for the Redbird as part of Twin City Days is over! Anthony and Kathy Masterson who live south of Festus found the prize package this (Wednesday) morning at the location where the new Darryl Hickey White Park will be in Crystal City. The Mastersons say they did search the area where Hickey White Park was originally located before it was closed a few years ago.

The park is named after Darryl Hickey White, who was a seven-foot-tall Crystal City High School basketball player who passed away in 1977. Crystal City has plans on the table to build a new park in his honor near the Twin City Little League fields. The clues to the whereabouts of the Redbird were read on KJFF.

For finding the Redbird, the Mastersons have won four St. Louis Cardinals baseball tickets on Friday, September 30th as well as a free hotel stay at the Residence Inn by Marriott hotel in Clayton.