Update on Port Road in Ste. Genevieve County & A History Lesson Behind the Name New Bourbon 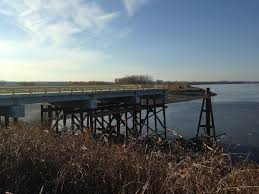 The road is still not fixed because the County has to go through the federal government in order to get it repaired.

Even when the road was ok to drive on, not many local businesses used the port anyway.

The New Bourbon Port is located three miles south of the City of Ste. Genevieve.

You may be asking…Why the name New Bourbon?

Well it used to be a thriving town.

When it was formed, Spain controlled the area and named the town Nouvelle Bourbon or New Bourbon.

The name was a little bit of spin, hoping to attract French immigrants, as “Bourbon” referred to the royal dynasty that had controlled both France and Spain in the late 1700s.

Spain wanted a buffer between the Americans east of the river and the Osage Native Americans on the west. New Bourbon continued to grow during the 1790s as French settlers continued to move to the area.

There were also Spanish and American names on the early registries of New Bourbon.

After the Louisiana Purchase, New Bourbon’s population dropped considerably and that’s when Ste. Genevieve became the largest town in what is now Ste. Genevieve County.