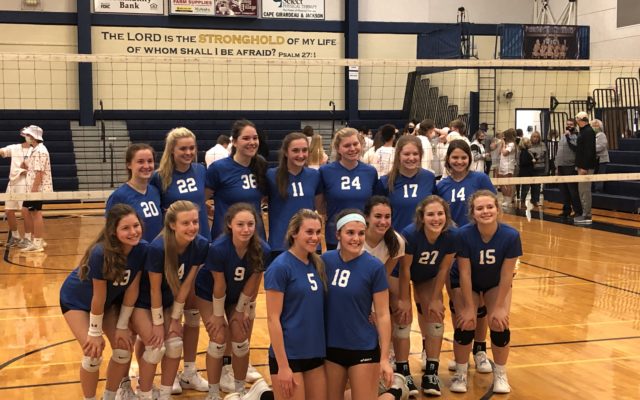 (Jackson) Valle Catholic volleyball got a sweet treat on Halloween as they won their sectional and quarterfinal matches to grab a spot in the Class 2 semi finals today on KREI. The Warriors battled the Woodland Cardinals in their sectional match up and won in a thrilling 5 sets (16-25, 25-14, 25-12, 24-26, 15-6). After Valle handled business in sets three and four to take a one set lead they had the Cardinals on their heels, but Woodland responded.

The Warriors came out on all cylinders in the fifth set and won the first 11 points. Woodland would finally tack on a few, but it was too little too late and Valle would end their season.

Last year, Valle Catholic fell to St. Pius in the state quarterfinals, but there were no memories of that today as they disposed of Saxony Lutheran in straight sets 3-0 (25-12, 25-22, 25-17). The Warriors were fatigued after playing the previous match to five sets, but got a 45 minute rest in between matches and made the most of the energy they had left to book a trip to Cape Girardeau.

The #1 ranked Valle Catholic Warriors (29-5-2) will take on the #3 ranked Miller Cardinals (31-2) in the Class 2 semi finals next Friday at the Show Me Center in Cape Girardeau.