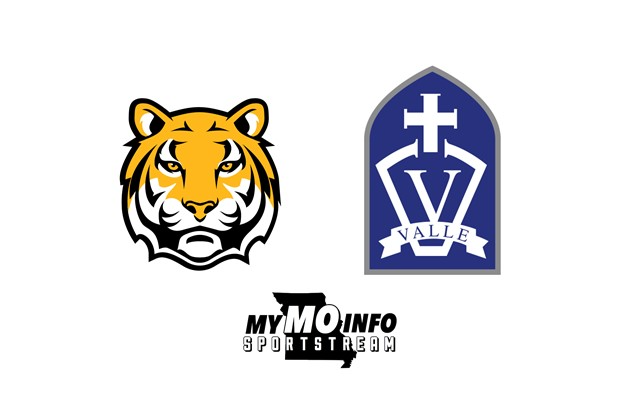 Valle Catholic played host to Arcadia Valley on the volleyball court tonight, in a game heard on the MyMoInfo SportStream. The Warriors proved too much for the Tigers to handle as Valle would win in straight sets 26-24, 25-16, 25-16. Everything worked early and often for the Warriors, but the Tigers would fight back in the first set to tie it at 24 each. That didn’t last long though, when Riley Siebert put an end to set number one.

The Valle hitters were picking their spots and connecting on some difficult points down the line.

Set three, and the match, ended on an ace from Makayla Joggerst. After the game Warriors head coach Nancy Fischer said her team worked hard and was ready to play tonight.

Fischer added that her hitters were playing at a high level.

Riley Siebert was named the Applebee’s of Farmington Player of the game with 2 aces, and 6 kills on the night. After the match she praised her team and their ability to work together

Tigers head coach Tara Lamb knows her team can be better and believes that even in a loss its good to take what you can from it.

The two could meet back up in the MAAA Conference Tournament and the Class 2 District 4 tournament. Arcadia Valley falls to 12-7 on the season and goes to the Jackson tournament starting on Saturday. The Warrior improve to 19-3-2 on the season and face cross town rival Ste. Genevieve on Monday.