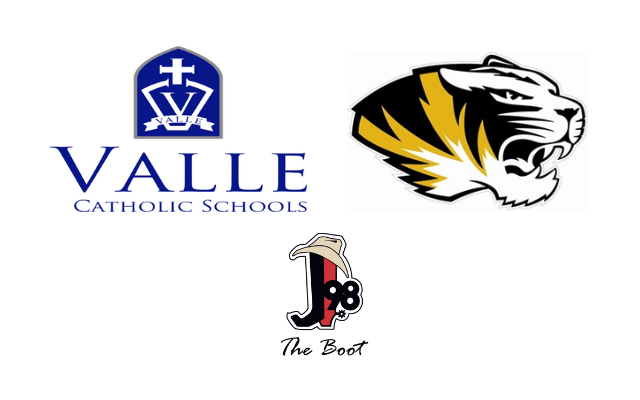 (Festus) The Valle Catholic Warriors defeated the Festus Tigers 48-20 in the J98 Game of the Week Friday night. Valle got the opening kickoff and wasted little time showing off its star running back.

Bryce Gielser ran for two touchdowns and over 200 yards on the night. Festus saw what Valle did on their opening drive and decided to match it with a score of their own.

Will Reece caught two balls for 101 yards for the Tigers. The Valle Catholic defense stepped up after giving up an opening drive touchdown, and the Warriors offense kept its foot on the pedal.

Adding on to the scoring total was the Applebee’s of Farmington Player of the Game Tim Okenfuss.

Okenfuss ran six times for 65 yards and a score. On defense, he recorded four sacks and multiple tackles for loss. Okenfuss told Regional Radio after the win that his coaches put him in the right position.

Valle head coach Judd Naeger talked about the contributions from everyone on the offensive side of the ball.

Valle Catholic improves to 2-0 and will face Fredericktown next week. Festus drops to 0-2 and will take on Windsor next Friday.