(Cape Girardeau) The Valle Catholic volleyball team overcame a two set deficit, but fell in extra points in the fifth in the class two title game to Christian at the Show Me Center in Cape Girardeau. Christian took the first two sets 25-22 and 27-25, but the Warriors revved up their blocking game and turned the matchup around in the third. Valle took set three 25-22 and forced a fifth with a  25-20 victory in set four…..

The Warriors had three chances to win it in the fifth, but Christian (out of O’Fallon) turned them away each time winning it 19-17. Valle coach Nancy Fischer was proud of her team and appreciated her seniors…..

Ella Bertram impressed with 20 kills and five blocks. Riley Siebert led the Warriors with 27 kills. Rachel Blum flew around the floor with 29 digs.

Christian entered the postseason at 2-7 and posted a winning record for the first time all year with the victory. They end the year at 8-7 with their first state championship. Valle’s 10th trip to the final four ends with their third second place finish. The Warriors close the season at 30-6-2. With MSHSAA going to the best of five format, this was the first five set championship match in state history. 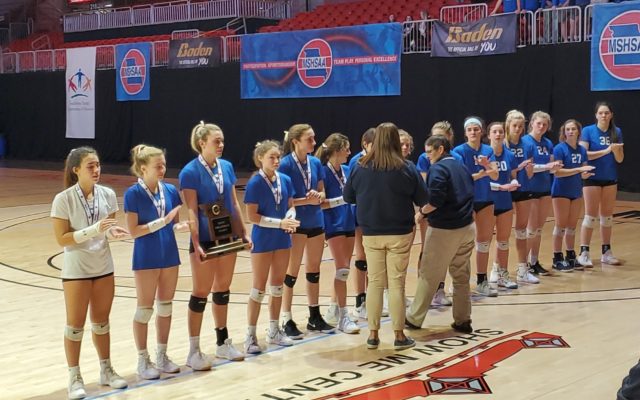