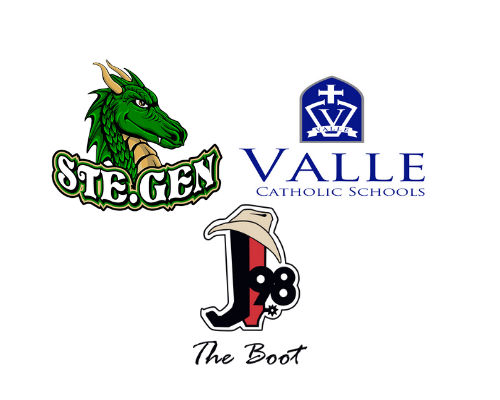 (Ste. Genevieve) The very first playoff edition of the Old Settlement Showdown lived up to the hype. After a back-and-forth battle through 36 minutes, Valle Catholic pulled away for a 69-35 win over Ste. Genevieve Friday night in the Class 3 District 2 semifinals on J-98. Valle took the opening kickoff to the Ste. Gen 25-yard line where they faced a fourth down.

Valle got the ball back then junior running back Bryce Giesler helped his own cause.

The next two drives were about the defenses with punts coming from both sides. With time winding down in the first quarter and a short punt from Grant Fallert, Ste. Gen started their drive in Warrior territory and took two plays to find pay-dirt.

Heberlie recorded six catches for 133 yards and two touchdowns through the air. Ste. Gen drove down the field on the ensuing drive. Sophomore Wyatt Springkamper made the most of his first carry.

With the game tied at 21, Valle got the ball back halfway through the second quarter. The Warriors drove methodically down the field and Giesler scored the second of his six rushing touchdowns to re-take the lead before halftime.

Gielser made it a two score game in the third quarter with another rushing score. Just when it felt like Valle would pull away, Ste. Gen responded.

Valle followed up with two consecutive touchdowns to make it 42-28. Giesler was named our Applebee’s of Farmington Player of the Game with over 315 total yards and six touchdowns. The junior said he wasn’t tired after carrying the ball 37 times.

The 10-0 Warriors take on St. Mary’s next Friday in the Class 3 District 2 Finals. The game will be broadcast on J-98. Ste. Genevieve ends their season at 7-4.