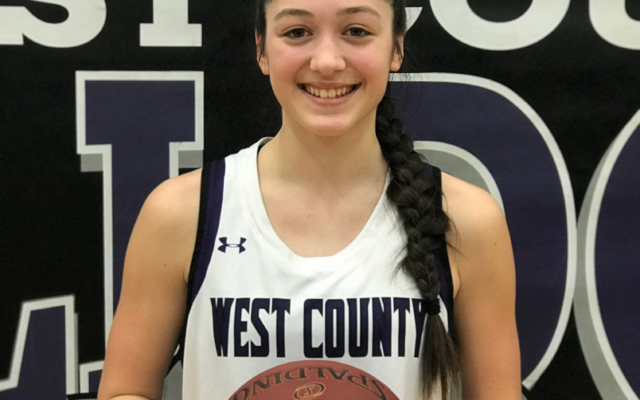 (FRANKCLAY, Mo.) – Another junior girls basketball player in the area has crossed the 1,000 point career threshold, as Dori McRaven from West County reached the milestone in a game on Thursday against Valley Caledonia.

She needed 18 points to reach the mark entering the contest, and was actually able to get it all in the opening quarter.

McRaven takes us through the big moment.

McRaven finished the game with 25 points as West County captured the win 73-32.

After scoring the late first quarter field goal to get to 1,000 points, McRaven says she was greeted by an abundance of people. The first was her head coach Bobby Simily.

As mentioned before, McRaven joins some elite and also familiar company with this accomplishment.

She is now the area’s third junior player to go over 1,000 points for her career this season.

From Arcadia Valley, Gracee Smith got her 1,000th point on December 19th, while Central’s Sophia Horton did the same on January 6th.

All three players made the Dream Team last year, and interestingly enough, the trio are on the same AAU team, Magic Basketball based in Farmington.

Those factors make the accomplishment even sweeter according to McRaven.

McRaven and West County are in the midst of a great season, as they have a 12-2 record and a 9-game winning streak.