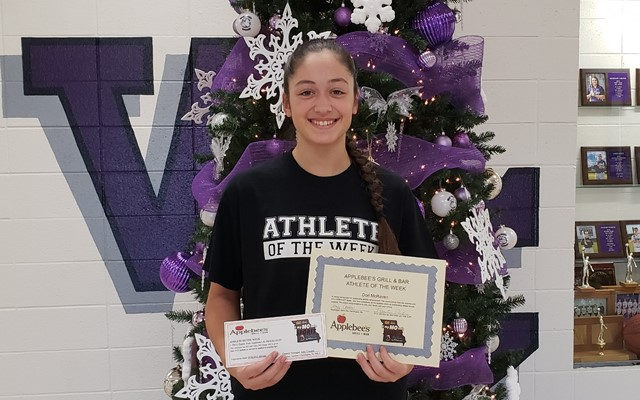 (Frankclay) A stellar week for the West County girls basketball team saw them go 3-0 and capture the championship of the Valley Caledonia Tournament for the first time since 2015 when they beat South Iron 48-46 in the title game on Saturday.

Lady Bulldogs’ standout Dori McRaven was sensational across the three games and was named the Applebee’s of Farmington Athlete of the Week.

She says it is exciting to earn the accolade so early on into her senior season.

The stats are impressive enough, but she also displayed the “clutch gene” when she hit the game-winning shot against South Iron to seal the team’s win.

McRaven says winning the Valley tournament was a big goal for the team after losing to South Iron in the title game for four-straight years.

The expectations were high for the West County girls basketball team with McRaven entering her senior season and talent across the board on the team.

She says after the week they just had, their confidence is soaring.

As Athlete of the Week, McRaven received a T-shirt, a certificate, and a coupon good for one free entree at Applebee’s in Farmington.