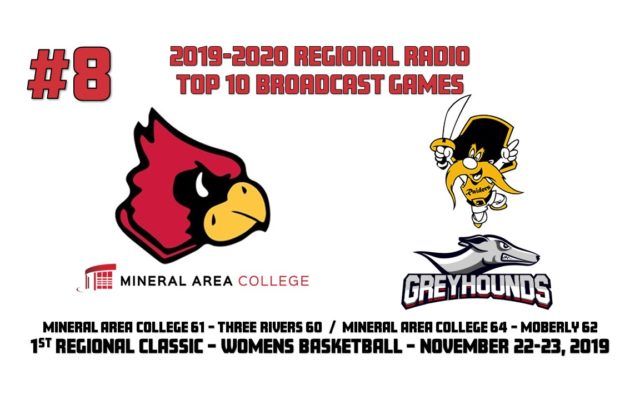 (Park Hills, Mo.) We’re taking a little artistic liberty with our #8 Regional Radio Top Broadcast Game for 2019-20.
This entry is actually two games that occurred 24 hours apart on November 22nd and 23rd as the Mineral Area College women knocked off the two teams that would eventually tie for the Region 16 regular season championship by a total of three points.

The Region 16 women’s basketball programs added a third game against one another for 2019-2020 season. The games didn’t count for Region 16 standings and were held as a pair of shootouts at State Fair and Three Rivers.

In their first game of the State Fair Regional Classic, MAC defeated 20th-ranked Three Rivers 61-60. Both teams had major offensive struggles, but MAC held a slim lead for most of the contest. After Three Rivers pulled ahead by one late in the fourth, sharpshooter Natalia Lalic knocked down a huge shot.

Lalic says she was focused on coming through in the clutch.

After a quick answer on the other end by the Raiders, Ruby Benn provided another spark for the Cards.

That was the only shot Benn took the entire game.
Another response from the Raiders tied the game once again. Then with just 0.4 seconds remaining, Lalic drew a foul

Lalic planned to make the first free throw and miss and second and she did just that.

MAC assistant coach Briley Palmer told us on the postgame show that the team showed guts.

======
The Cardinal ladies made it a 2-0 weekend by coming from behind to defeat the Moberly Greyhounds 64-62 less than 24 hours later. Moberly was unranked at the time but went on to claim a share of the regular season and also won the post season Region 16 tournament. The Lady Hounds qualified for the national tournament as the #16 seed.

MAC led by seven at half, but Moberly pulled ahead in the fourth by as many as seven points. The Cardinals mounted the comeback with some timely shooting from Keanna Williams

Williams made only eight threes all season but drilled the only one she took in this game.

And once again it was Ruby Benn to the rescue, providing the final field goal.

After taking a two point lead, MAC needed one more stop to seal the win.

That wrapped up a fantastic 24 hour span for the Cardinals.

Our former sports director Andy Humprey was there to cover the games on KREI.

MAC went on to go undefeated in those shootout games, but finished third behind Three Rivers and Moberly in games that counted for the Region 16 standings.