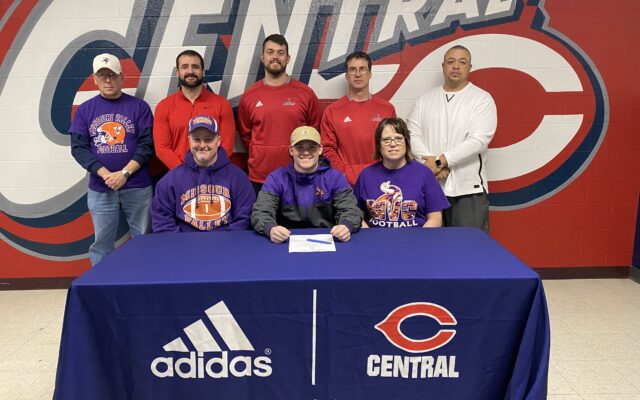 (Park Hills) Another Bridges is becoming a Missouri Valley Viking as the youngest brother, Jett, signed his national letter of intent to play football at the college in Marshall. Jett says it was an easy decision to keep the legacy going at MVC.

Bridges had a phenomenal career as a Central Rebel. With only two years as the starting signal-caller, Bridges threw for the 2nd most passing yards in school history with 4,252, the 2nd most touchdown passes with 46, and finished with a record of 18-4. Bridges says the reason he was able to have success on the field was because of his supporting cast.

Jett was only 3 yards away from breaking the single-season record for passing yards. Rebels Head Coach Kory Schweiss says that Missouri Valley College is getting a great quarterback.

While Jett’s 18-4 record as a starting quarterback sounds impressive on paper, Coach Sweiss says it’s even more astonishing considering the competition that he faced.

The Central Rebels finished the past season with a record of 10-2 and won the Class 3 District 1 Championship against Kennett on November 12th. They would lose in the State Quarterfinals to eventual State Champion St. Mary’s.