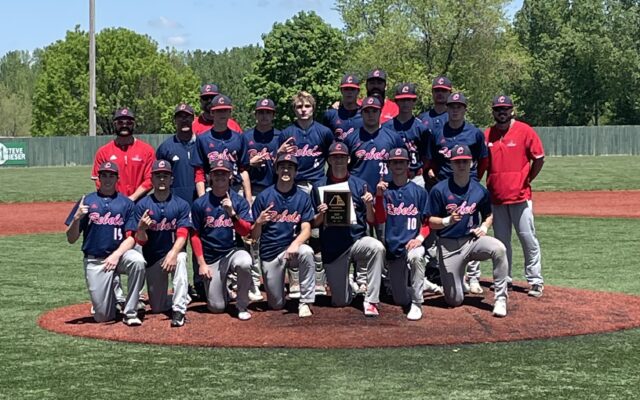 (Ste. Genevieve) The Central Rebels captured the 2022 MAAA Conference Tournament Championship today defeating the Valle Catholic Warriors 5-3. The Rebels went wire-to-wire with the lead, getting on the board early in the first inning after a SAC fly from Casen Murphy.

Murphy would do it again in the second inning with a two-RBI single. Along with a Ty Schweiss RBI, the Rebels took a 4-0 lead after the first two frames of play. Following the scoring outburst, the defense for Central would maintain the lead.

Pitcher Nathan Hamski threw 6 innings for Central and only gave up 4 hits on the day. However, at the bottom of the seventh, he had to be pulled because of pitch count rules. After the pitching change, Valle was able to score three runs thanks to Josh Bieser and Aiden Heberlie, but could not complete the comeback as Slade Schweiss would catch a fly ball in shallow right to seal the game and the championship for the Rebels. Head Coach Ronnie Calvird says his team found a way to win.

Casen Murphy was our Applebees of Farmington Player of the Game with 3 RBIs. Central improves to 15-3 on the season while Valle Catholic falls to 22-7.