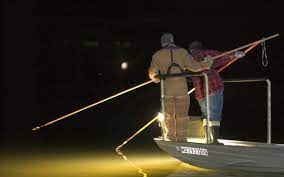 (Ironton) The old, Ozark tradition of gigging fish can be done legally now. The season started up last week in Missouri. Iron County Conservation Agent Sarah Ettinger-Dietzel says most giggers wait until the weather is cold before they put their boats in a crystal-clear Ozark stream.

Popular streams for gigging are the Current, Meramec, Eleven Point, and the Gasconade rivers. The gig usually has three or four prongs and the best ones are forged by local blacksmiths. The gig is attached to a pole, some as long as eight feet or more. The sport is usually done at night with bright lights attached to the front of a boat where the gigger stands and throws the gig and pole at the fish to prong or gig. Only rough fish are allowed in Missouri, such as Redhorse, Hog Suckers, and Yellow Suckers. The best of the best can throw their gig pole in a quick-moving boat, at a fast-swimming fish and spear it with no problem. Missouri’s gigging season runs through February 15th.