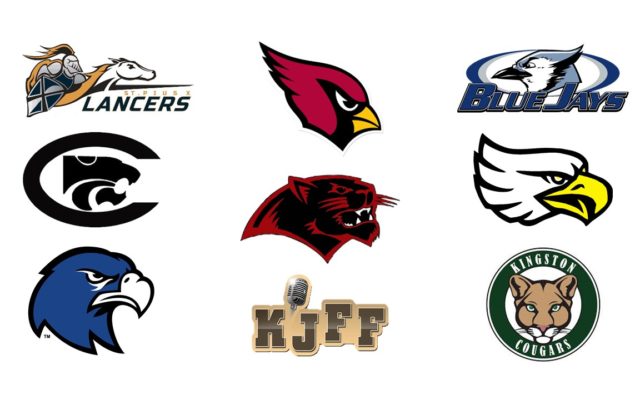 The boys’ semifinals are set in the Class 3 District 3 basketball tournament after first-round games Monday in Herculanuem.

In the opening game, the third-seeded Jefferson Bluejays knock off the Kingston Cougars 56-24.

The reigning district champions got a big boost off the bench from junior guard Nolan Roth.

Roth finished with 7 three-pointers and 24 points to earn Applebee’s Player of the Game as the Bluejays improve to 14-11.
Jefferson head coach Sean Breeze said Roth’s outburst wasn’t totally unexpected, but it was necessary.
Kingston’s season ends with a record of 9-16.
The second game saw the second-seeded St. Pius Lancers defeat the Cuba Wildcats 65-41.
Defense and senior leadership powered the Lancers to the win.
Josh Ruble finished with 12 points, while Lancers were led by Eli Boyer’s 16 points.
St. Pius head coach Chris Miller earned his 100th career win with the victory as the Lancers improved to 19-7.
In game three, the host Herculaneum Blackcats upended the Bourbon Warhawks 62-46.
Just like in the girls’ bracket, the fifth seed became the only lower seed to win, as the Blackcats pulled away in the third quarter behind junior guard Grant McCullough.
McCullough finished with a game-high 17 points to earn Applebee’s Player of the Game as the Blackcats improve to 11-14.
Herky head coach Jason Jarvis said McCullough was timely with his shooting.
Bourbon’s season ends with a mark of 18-8.
The final game of the night was a 61-25 win by the top-seeded Steelville Cardinals over the Grandview Eagles.
Senior guard Tanner Diaz got the Cardinals rolling in the first quarter.
Diaz scored 12 of his game-high 20 points in the first quarter and was named Applebee’s Player of the Game.
While Grandview ends the season at 8-19, Steelville wins its 15th straight game and improves to 23-2.
The Cardinals will face Herculanuem in the first of the Class 3 District 3 boys’ semifinals Wednesday night, followed by Jefferson taking on St. Pius.
You can hear the games on the MyMoInfo SportStream.