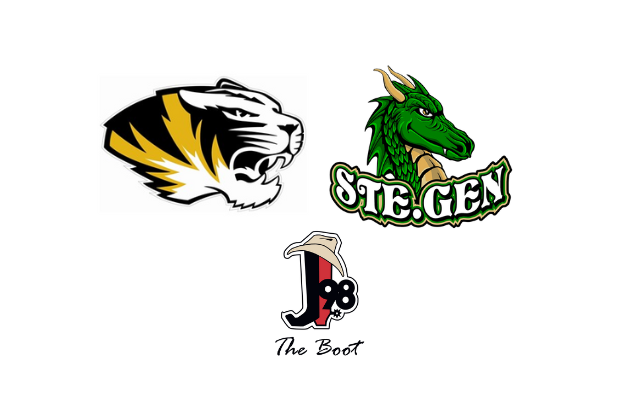 (Ste. Genvieve) In our J98 Game of the Week, 85 total points were scored as the Ste. Genevieve Dragons defeated the Festus Tigers 50-35 in Ste. Genevieve. It was an explosive first quarter for both teams and in only 3 plays, the scoring got started for the Dragons.

It took a little longer for Festus, but the Tigers would trot down the field to tie up the game.

The offensive explosion continued for the Dragons, only needing 2 plays on their second drive to score. This time with power running.

Festus took their next score through the air, with a highlight play from star senior Arhmad Branch.

However, Ste. Genevieve’s offense was just too much for the Tigers. Scoring again with an Aiden Boyer dime to Aiden Meyer.

But don’t go anywhere, cause Festus responded to every shot from Ste. Genevieve. Hayden Bates scored with some power running.

After both teams got stops defensively. Ste. Gen scored again before halftime making the score 28-19. In the second half, Ste. Genevieve took over and scored on their first drive to lead 36-19.

Both teams would trade scores and the Dragons led the Tigers 43-27 with 4 minutes left in the fourth quarter. Festus still had some fuel in the tank and scored late to keep the game close.

But senior Kaden Flye put the final nail in the coffin on the Festus comeback; returning an onside kick for a touchdown.

Kaden Flye was our Applebee’s of Farmington Player of the Game with 225 total yards and 4 touchdowns. Ste. Genevieve Head Coach Jay Pope says his skill guys represent what it means to be Ste. Genevieve football players.