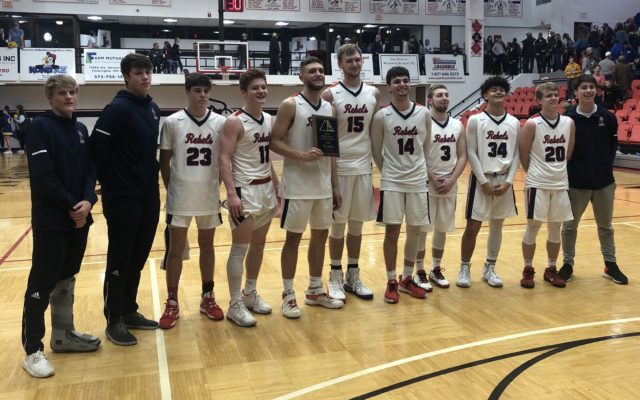 In the third place game between Farmington and Ste. Genevieve, it was the Knights who came out on top by a final score of 59-54.

Farmington trailed by two at halftime but rattled off an 11-0 run coming out of the break to take the lead and they never looked back.

Bracey Blanton was our Applebee’s of Farmington Player of the Game as he finished with 20 points in the contest.

Knights head coach Terry Noble says after a slow start they were able to turn things around in the second half.

With the win Farmington improves to 13-9 on the season and they will next host Cape Central on Tuesday.

The loss drops Ste. Genevieve to 12-11 and they will be on the road against Oak Ridge on Tuesday.

In the boys championship of the MAAA tournament, Central topped North County by a final score of 44-35.

The Rebels were in front for the majority of the game, thanks in large part to Applebee’s of Farmington Player of the Game Mason Williams.

The freshman led all scorers with 19 points as he commanded the court in his first MAAA Conference Tournament.

The win improves the Rebels to 18-4 on the season as they take home the MAAA Conference Tournament Championship. They will next host Arcadia Valley coming up on Tuesday.

North County finishes in second in the tournament as they fall to 16-7 and will host Festus on Tuesday.