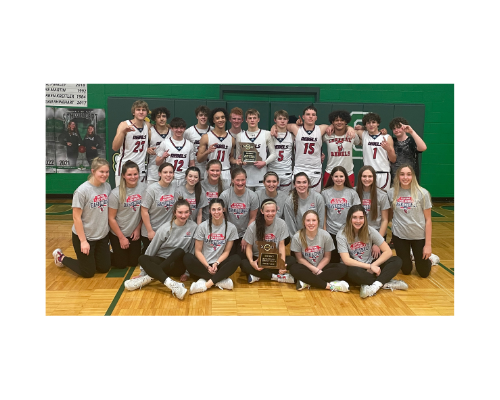 (Ste. Genevieve) Tonight was a celebration for the Park Hills community as the boys and girls basketball teams won the Class 4 District 2 championships over the Potosi squads. The Lady Rebels kicked the night off with a 56-44 win over the Trojans.

Central was challenged early thanks to Potosi senior Kiersten Blair having a career night in scoring.

Blair finished with 19 points and nine rebounds. In the end, the Rebels’ ability to spread the ball around proved too much for the Trojans.

Central went 20-of-41 from the free-throw line, keeping Potosi in reach during the fourth quarter, but the Rebels made the necessary plays to seal the win.

Three Rebel players finished in double-digit scoring. Sophomore Khloe Dischbein collected 15 points and was the Applebee’s of Farmington Player of the Game.

It’s the Lady Rebels’ 8th district title in nine years under Mapes. Central improves to 20-5 and will play Doniphan in the state sectionals Tuesday evening at the Farmington Civic Center.

In the boy’s district championship, the Central Rebels outlasted the Potosi Trojans 74-52 to win their third straight district championship. Central got out to a lead early thanks to the play of Sophomore Guard Jobe Bryant, who put up 13 points and dished out 5 assists in the first half.

The Trojans weren’t phased and stood strong against the high-powered Rebels, only trailing by 8 at halftime 28-20. In the third quarter, it was the Trojans who came out at the half with the momentum. The purple-and-gold went on an 8-0 run and tied up the game.

It was gut-check time for the Rebels after the Potosi run and another dynamic Rebels sophomore would answer the call. Caden Casey would hit his first shot of the game break the tie.

The Trojans and Rebels would trade baskets late in the third, but with time winding down, it was time for big-time players to make big-time plays. Jobe Bryant delivered.

The fourth quarter is where Central would pull away and Potosi would run out of gas. The Rebs went 11-13 from the free-throw line in the final quarter to secure the win.

Bryant was our Applebee’s of Farmington Player of the Game with 24 points, 8 assists, and 5 steals to lead Central to their 8th district championship in 10 years. Head Coach Brad Gross is proud of how his guys answered.

Central improves to 20-5 on the season and will play New Madrid County Central in the state quarterfinal from Farmington Civic Center on March 8th. Potosi ends their season at a record of 15-12.