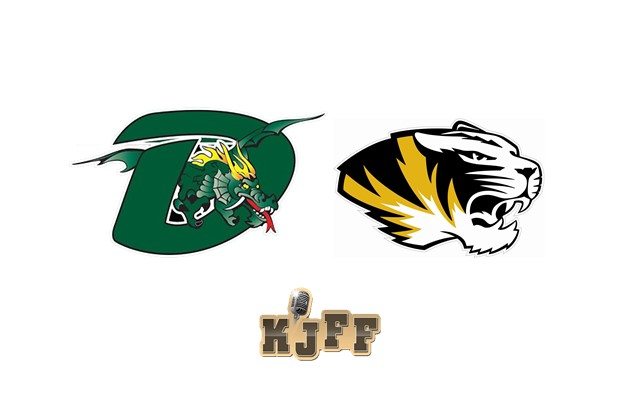 (Festus) A spot in a district championship game is on the line on Jefferson County Friday Night Football Friday on KJFF.

The DeSoto Dragons meet the Festus Tigers in the Class 4 District 1 semifinals, a rematch of a regular-season meeting between MAFC Red Division rivals.

DeSoto dropped the first matchup 36-13, but they only trailed 7-0 midway through the third quarter before losing star senior Dominic Punjani to injury.

Dragons head coach Chris Johnson says, even in a loss, he felt the Festus game was a turning point for his team.

Since falling to 0-4, the Dragons bounced back from 2 weeks off to due to COVID-19 and put up competitive showings against Hillsboro and Fox before earning their first win against Potosi.

Now, having earned their way to the semifinals with a forfeit win, Johnson says he believes his team is capable of beating anybody, let alone the top-seeded Tigers.

The Festus Tigers were a Farmington-buzzer-beating field goal away from an undefeated regular season but still earned the top seed in Class 4 District 1 and a first-round bye.

Despite a revolving door at running back, Cole Rickermann has been the steady hand Festus needed.

The junior quarterback has kept the offense explosive with over 1,700 passing yards and 25 touchdowns.

But for all their success in his first season running the program, Ofodile says he’s reminding the Tigers how hard they had to work to beat DeSoto once.

The Dragons did win last season 38-20, ending a 19-game losing streak in the series.

But the Tigers got revenge with a 41-7 victory in the playoffs.

2-6 DeSoto faces 8-1 Festus this time for the right to play in the District 1 championship against either Hillsboro or North County.

Coverage of Jefferson County Friday Night Football begins Friday evening at 6 with the Flieg’s Equipment Pregame Show on AM 1400 KJFF.