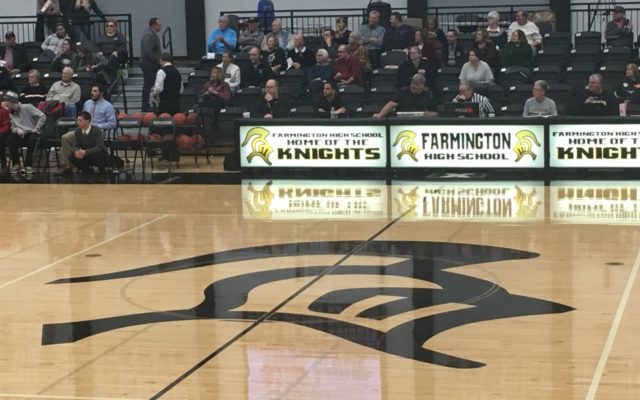 (FARMINGTON, Mo.) – The Farmington Knights opened up MAAA Large School Division play with a win Friday over the Ste. Genevieve Dragons, by a final of 74-56.

The Knights jumped out to an early lead in the opening quarter, thanks to a buzzer beater by sophomore guard Bracey Blanton.

Blanton finished with 16 points on the evening.

Just ahead of him was junior guard Brant Gray, who had 19, including a big three at the start of the third quarter to extend the Farmington lead.

Gray was our Applebee’s of Farmington Player of the Game.

Other than a bit of a lull in the second quarter, head coach Terry Noble was pleased with his team’s effort.

For Ste. Gen, senior Christian Boyer paced the Dragons with 19, while junior Logan Trollinger put in 15.

The Knights are now 6-5 for the year and 1-0 in the Large Schools Division of the MAAA Conference.

Farmington hosts Desoto next on Tuesday.

They’ll travel to Arcadia Valley on Tuesday, and we’ll have the contest on the MyMoInfo SportStream.