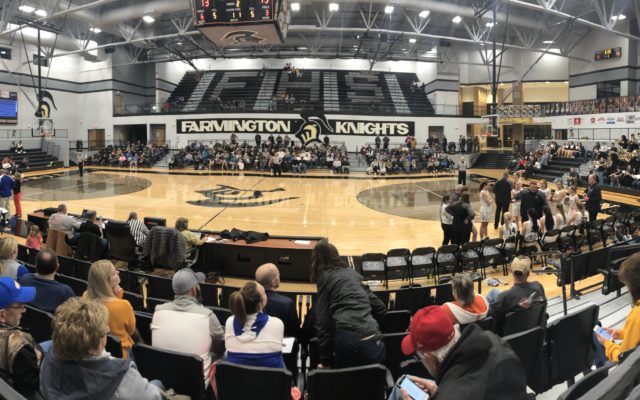 (Farmington, Mo.) The Farmington Knights girls basketball team prevailed at home over the North County Raiders by a final score of 50-47 tonight on the MyMoInfo SportStream.

The Raiders were in control for most of the first half and senior guard Julia Christopher drilled a big three late in the second to extend the lead heading into the break.

The Knights rallied back late in the frame but it was North County who went into halftime with a 25-21 lead.

Then in the third quarter, it was Farmington who came out blazing and gave themselves a big lead on a three pointer by Emma Gerstner.

North County then put together a rally of their own as they trimmed the lead to just one at the end of the third quarter.

It was back-and-forth throughout the fourth quarter but ultimately it was Farmington’s Jade Roth who hit a huge shot late that gave the Knights the breathing room they needed.

With the win Farmington improves to 9-7 overall and 3-1 in MAAA Large School play. They next head out on the road to take on the undefeated Ste. Genevieve Dragons on Monday, and we’ll have coverage of that game beginning at 7:15 on AM 800 KREI.

The loss drops North County to 13-3 overall and 1-2 in MAAA Large School play. They next host the Potosi Trojans coming up on Monday.