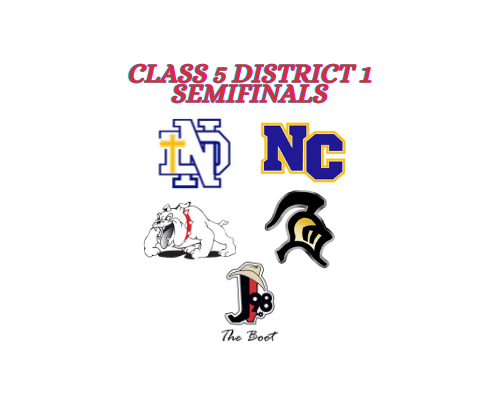 (DeSoto) Some of the best girls’ basketball teams in the state will collide in the Class 5 District 1 semifinals Wednesday on J98.

The Farmington Knights and North County Raiders are hoping that it ends with a rematch of conference and county rivals set up in a title fight.

Farmington faces off with Sikeston in the first game.

Farmington has rode a stingy defense to their success, allowing only 31-and-a-half points per game.

While players like juniors Grace Duncan and Skylar Sweeney have all had their moments this year, Knights head coach Rusty Sancegraw says junior forward Jade Roth is the straw that stirs their offense’s drink.

The third-seeded Raiders and second-seeded Bulldogs met up in the Class 5 state sectionals last year.

With the number of districts shrinking, now a pair of 18-6 squads meet up for a trip to a title game.

Junior Paris Larkin and seniors Tyler Conkright and Kamryn Winch have been stars all season, but North County head coach Joe Arnold says they’ll need to be at their best to topple Cape Notre Dame.

Coverage of the Class 5 District 1 semifinals begins with the Flieg’s Equipment Pregame Show at 5:45 Wednesday evening on J98.