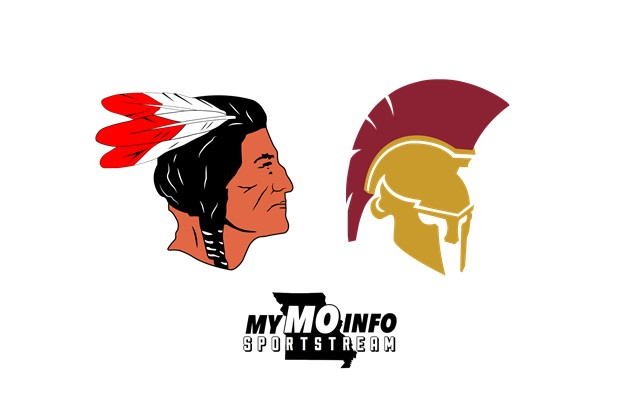 (St. Louis) A slugfest on the gridiron went the way of De Smet tonight on the MyMoInfo SportStream as the Spartans edged the Fox Warriors by a final score of 13-0 in the Class 6 Semifinals.

The story of the night was just how well Fox played on the defensive side of the ball in slowing down an offense that was averaging over 43 points per game.

In the first half, the Warriors forced three different turnovers on downs thanks to some tremendous efforts.

Despite pitching a shutout for almost the entire first half, eventually De Smet was able to break through on a third and goal from the 11-yard line.

Junior quarterback Seth Marcione was contacted in the backfield but broke away and snuck in for six.

A deep drive for Fox on the ensuing possession was stopped after a failed fourth down conversion and De Smet took it to the break leading 7-0.

That’s where the score stood through the entire third quarter as both teams kept trading punches.

Then at the start of the fourth quarter, it was running back Taj Butts who gave the Spartans a two-score lead.

That was the final as De Smet maintained the shut out the rest of the way.

The Warriors’ offense had its moments in the game, but four turnovers – three fumbles and an interception – were too much for the triple-option attack to overcome.

Despite that, Fox held De Smet to its fewest points scored of the season by a long shot and played to the closest margin of anybody against the Spartans in 2020.

This was truly a monumental season for Fox.

Not only that, but they gave a De Smet team that has not lost since 2018 everything they could handle.

Warriors head coach Brent Tinker says he is proud of his team and humbled by the support they have received.

Fox finishes the season at 10-2 while De Smet improves to 6-0 and will head to the Class 6 State Championship next week to take on the winner of Raymore-Peculiar and Liberty North.