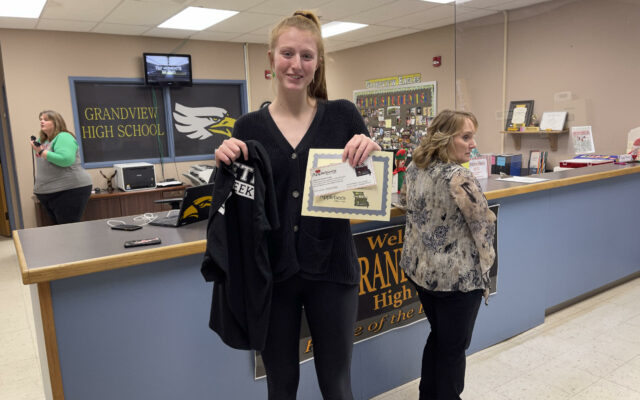 After exploding for 18 points in a district semifinal win at the end of her freshman year, the Grandview Eagles‘ 6-foot-forward has only gotten better.

Her latest production was good enough to make her the Applebee’s of Farmington Athlete of the Week.

Wakeland averaged better than 17 points, 15 rebounds and 4 blocks per game during the Black & Red Classic in Herculanuem last week.

That included a monster performance of 26 points and 25 rebounds in the consolation-game win over Pacific.

She says that type of production is what she wants, but she also hopes is just business as usual.

Wakeland has had some help to start this season in the form of her newest teammate and younger sister.

Anna Belle says Little Sis has been a welcome addition to her team on the court.

Wakeland is averaging a double-double of almost 15 points and 14 rebounds per contest overall this season.

Grandview has won three of its last 4 games since dropping their season opener.

Wakeland says their experience is starting to pay off.

Wakeland was a first-team all-conference selection in the JCAA Small-School Division last season.

As Athlete of the Week, she receives a T-shirt, a certificate, and a coupon for one free entree at Applebee’s in Farmington.