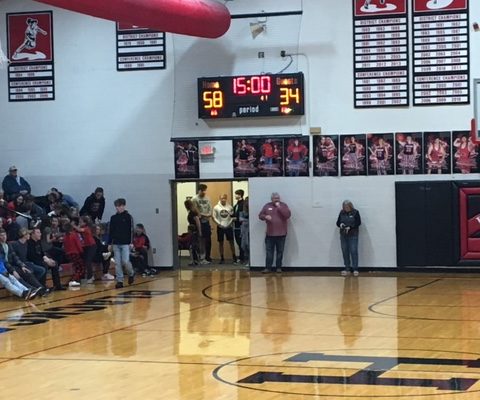 (HERCULANEUM) The Herculaneum girls and the Jefferson boys were victorious in a Jefferson-Herky girls and boys doubleheader at Herculaneum last night on KJFF.

The Lady Blackcats won 58-34 behind 18 points from Applebee’s of Farmington Player of the Game Paige Fowler.

In the 2nd game of the doubleheader, the Jefferson boys team pulled out a narrow 53-52 win over the Blackcats. Picking up the action in the final few seconds of the game, the Blackcats were down 53-51 when Herky forward Jordan Duncan had an opportunity at the free-throw line to tie it up.

After the timeout, Duncan missed the tying free throw and then Jefferson’s Colton Richardson was fouled right after he rebounded the miss. Richardson couldn’t convert either of his free throws, leaving the door open for a game-winner from the Blackcats.

The win for the Blue Jays puts their record at 9-8 overall and 1-0 in the Jefferson County Small Schools Conference standings. The loss for the Blackcats drops them to 7-8 overall and 0-2 in the conference.

Jefferson will host Valle Catholic on Monday. The Herculaneum boys return to the court on Monday as well to begin the 7th Annual Bruce Thomas Tournament as the 4th seed, going up against Dupo out of Illinois. That tournament will be broadcast on AM 1400 KJFF beginning at 3:45.