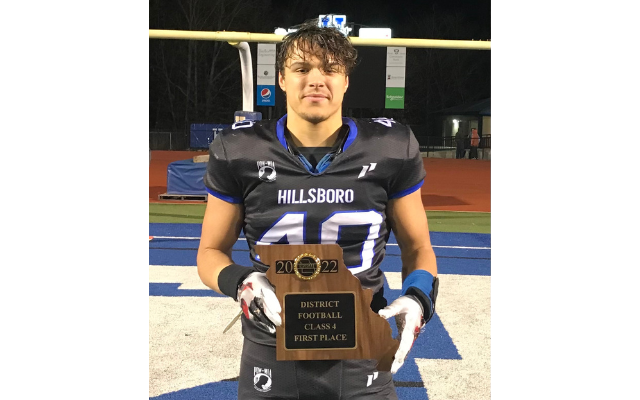 (HILLSBORO)  Austin Romaine scored six touchdowns, propelling the Hillsboro Hawks to a 55-6 win over Festus as the Hawks won the Class 4 District 1 title.
The game Friday night was broadcast on AM 1400 KJFF. Romaine scored his first touchdown at 11:18 in the first quarter to get the Hawks rolling.

Hillsboro head coach Bill Sucharski said he knew the Hawks would have to come out and score early against Festus.

The Hawks will play the 9-2 St. Mary’s Dragons in the next round as they downed Rockwood Summit 48-3. That game will be played either on Friday night or Saturday the 19th. An announcement will be made soon.  Festus ends their season with a record of 6-6. The Hawks move on with a record of 10-1.