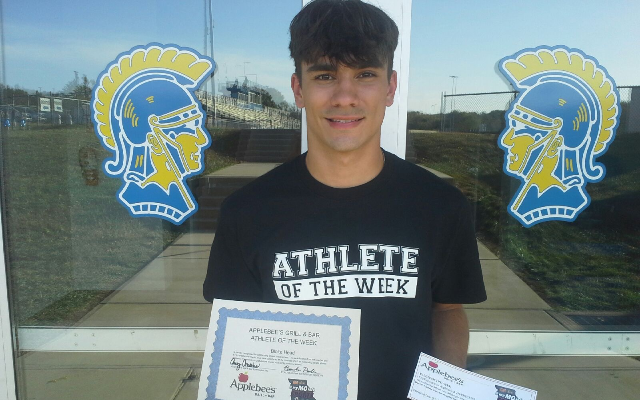 (Bonne Terre) The North County Raiders football team had one of their best games of the season this past Friday as they won in a rout over the Windsor Owls by a final score of 56-20.

A big night offensively meant several big performances for the Raiders, but it was senior running back Blake Head who stood out among the rest.

He compiled 219 yards on just nine carries and scored four touchdowns en route to being named our Applebee’s of Farmington Athlete of the Week.

Head’s usage in North County’s offensive game plan has varied from week to week as he came into the game against Windsor with 21 carries for 158 yards and 3 TD on the season.

A monster performance more than doubled his season output as he now has 30 carries for 377 yards and 7 touchdowns.

Head says he is able to keep himself prepared for when his number is called by going hard in practice.

Like any good running back, Head says he knows tremendous blocking by the offensive line helped pave the way for his big game.

As Athlete of the Week, Head received a T-shirt, a certificate, and a coupon good for one free entree at Applebee’s in Farmington.

The North County football team will be back at home on Friday when they host the Potosi Trojans.

We will have coverage of that game beginning at 6 on J98.