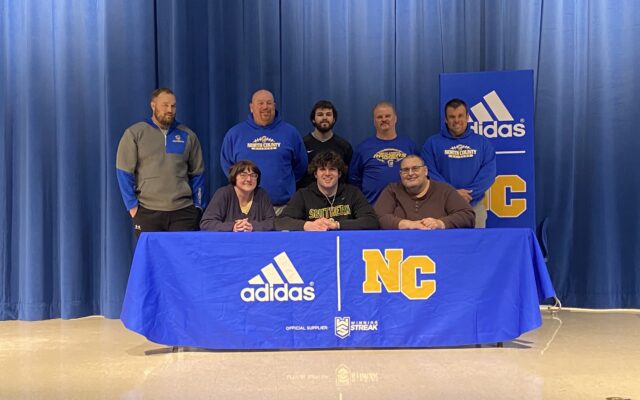 (Bonne Terre) North County Senior Defensive Lineman Payden Allen has signed his national letter of intent to play college football for the Lions of Missouri Southern State University in Joplin. It’s fitting that Allen chose MSSU, as he was a prowling lion on the field this season. The Dream Teamer accumulated 44 solo tackles, 21 tackles for loss, 6 sacks, and 1 safety this year for the Raiders. Allen says it’s a dream come true to play at the next level.

It was a really special season for the Raiders, as it was the first time since 1997 that North County made it to the State Semifinals. Allen says that it’s a run he’ll never forget.

Allen is currently on the basketball team for North County. But just because he is spending time on the hardwood, doesn’t mean the grind stops on the gridiron.

One of the senior’s favorite memories from this football season wasn’t even a play he made. In fact, it wasn’t a play at all.

Missouri Southern State Football finished 3-8 last season and will kick off next season on September 1st at home against Nebraska-Kearney.