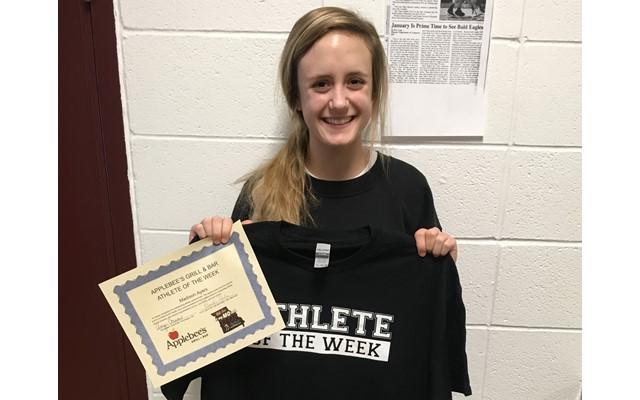 (Annapolis) A great week for the South Iron girls basketball team saw the Lady Panthers bring home the Black River League Tournament championship with a 55-50 win over Ellington in the title game on Saturday.

While there were several great performances for the South Iron girls in the tournament, it was sophomore Madison Ayers who stood out among the rest and was named our Applebee’s of Farmington Athlete of the Week.

She says the team had added motivation after losing to the Lady Whippets in the BRL Tournament in back-to-back years.

In the team’s two wins at the BRL Tournament last week, Ayers averaged 20 points, shot 61% from the field, 90% from the free-throw line, and added 3.5 assists, 4 rebounds, and 4 steals per game.

After the graduation of Callie Miller and Madison’s sister Michaela from last year’s final four run, there was a leadership void for this year’s Lady Panthers squad – particularly with no seniors on the roster.

Ayers says she and her teammates knew they had to step up and learn how to lead this year.

At (12-3) on the year and poised for a strong finish to the regular season, the Lady Panthers are rounding into form at exactly the right time.

Ayers says they have some lofty goals as they eye another deep postseason run.

As Athlete of the Week, Ayers received a T-shirt, a certificate, and a coupon good for one free entree at Applebee’s in Farmington.