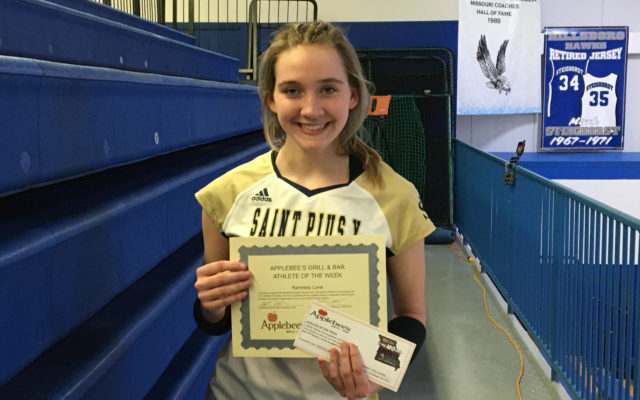 The outside hitter has earned multiple all-conference and all-district honors and was an all-state honoree in Class 2 in 2019.

But she’s closing out this season stronger than ever, and now she is the Applebee’s of Farmington Athlete of the Week.

But despite all her individual success, Lane points first and foremost to everybody else on her squad.

Lane was magnificent in St. Pius’ final 3 matches of the regular season, piling up 55 kills and 35 digs on the way to a pair of wins against Hillsboro and Windsor.

Knowing the Hawks were looming in the Class 4 District 2 tournament, Lane says she definitely looked to raise her game in that match.

And while Lane wanted to thank her coaches for what they do to make her better, she had more praise for her teammates, both friends and family.

Lane is the leader in kills in the JCAA by more than 150.

She will lead St. Pius into a district championship match at Hillsboro Friday that you’ll be able to hear on AM 1400 KJFF.

As Athlete of the Week, Lane receives a T-shirt, a certificate and a coupon for a free entree at Applebee’s in Farmington.

To hear the full interview with Kennedy Lane, click play below.