Ste. Genevieve And Central Come Out On Top In Semis, Will Meet In C2D3 Championship On Tuesday On KREI 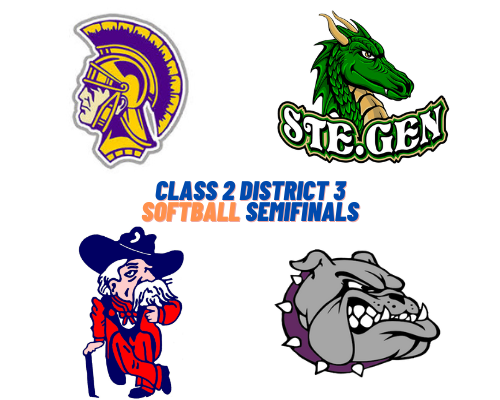 The Trojans and Dragons started the day off and Ste. Genevieve’s Isabel Basler took advantage of the first pitch she saw.

Potosi answered in the bottom half of the inning when freshman Maggie Williams stepped up with a runner on second.

But just like the top of the first, Ste. Gen regained the lead courtesy of the long ball.

Dragon senior Chloe Walker added an RBI single and scored on an error to bring us to the final score.

Bailey Deck was named the Applebee’s of Farmington Player of the Game going 1-for-3 with the game-winning home run and had the defense to back it up.

Ste. Gen’s head coach Becky Keim said her team was ready to go from the start.

Ste. Genevieve improves to 17-8, a school record for wins in a season. Potosi ends their season at 17-6.

In our second semifinal, the #3 seed Central Rebels upset #2 West County by a final score of 6-0. It was all Rebels early as Allie Kelly knocked in a run in the first inning to start the scoring while Kaydence Cosby brought home another in the third.

Later in that same inning, Central would break out into a huge lead thanks to Alexia Poppe.

Taylor Marler would add another 2-RBI single in the top of the seventh to wrap a bow on the victory.

While it was a phenomenal team effort for the Lady Rebels, they were led by their senior in the circle Allie Kelly. Kelly was named our Applebee’s of Farmington Player of the Game and finished with 7 innings pitched, allowing 2 hits, no runs, and 10 strikeouts. She also had a great day at the plate, going 2-3 with a double, a RBI single, and was intentionally walked her last at-bat.

Central improves to 15-6 while West County finishes their season at 11-11.

We will crown a district champion on Tuesday as the Central Rebels face the Ste. Genevieve Dragons at the Trojan Recreation Complex on AM 800 KREI or streaming online at MyMoInfo.com. Join us at 4:15 for the Fliegs Equipment Pregame Show.