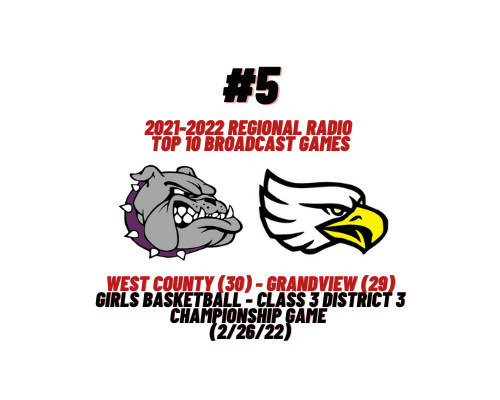 (Leadwood) On February 27th, the West County Girls basketball team won their second straight district championship in dramatic fashion over the Grandview Eagles. In a tight contest, whoever got the ball last was going to win the game. Well with time winding down and a 1-point deficit, All-State Guard Alivia Simily had the ball in her hands with a chance to win the game and delivered. The Lady Bulldogs punched their ticket to the state bracket and eventually placed 4th overall in Class 3. The Class 3 District 3 Finals is fifth in our Regional Radio Top Ten Broadcast Games.

The West County Lady Bulldogs win back-to-back district championships after defeating the Grandview Lady Eagles 30-29. The game was neck-and-neck from buzzer-to-buzzer, Grandview’s Wakeland sisters were giving the Bulldogs problems in the first quarter.

The Eagles found themselves with all the momentum early, but a big shot by Bulldog’s Junior Morgan Simily at the first quarter horn kept the spark alive for West County.

Both teams would trade baskets and leads up until the fourth quarter and only 7 total points were scored in that final quarter of play. 5 of them came very early.

It took 6 minutes and 35 seconds until another point was scored, but it was the biggest basket of the entire game. The Bulldogs called the number of junior guard Alivia Simily and she delivered.

It in fact was the big shot, and Alivia Simily was our Applebee’s of Farmington Player of the Game with the district-winning drive. Head Coach Bobby Simily talks about the final moments of the game.

West County would go on to Springfield and place 4th at states. They put up a good showing against runner-up South Shelby and competed with girls basketball powerhouse Strafford. The Lady Bulldogs finished with a record of 24-6.