Valle Catholic follows Heberlie, Stoll to 9-0 with win vs St. Pius on KJFF 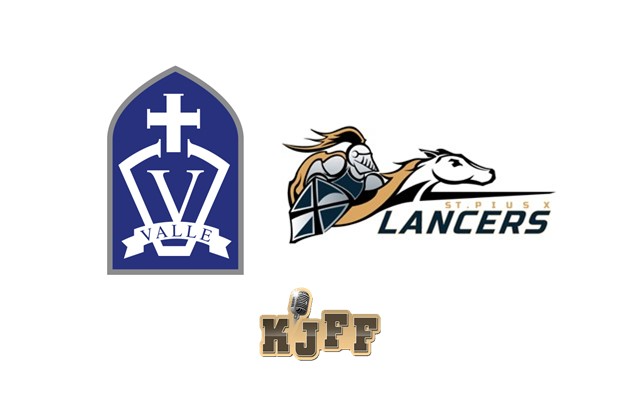 (Festus) The Valle Catholic Warriors kept on trucking in their undefeated campaign with a 52-13 win over the St. Pius Lancers Friday night on KJFF.

As soon as Valle got off the field on defense, senior running back Cory Stoll took his turn busting off a big play.

The Warriors got another stop and would start to make some big plays through the air.

The next 2 touchdowns Valle Catholic scored were tossed by Fallert, but the star of the night was the guy he was throwing to.

Aiden Heberlie needed only one half of football to pile up 172 receiving yards and a pair of touchdowns on his way to earning Applebee’s of Farmington Player of the Game.

Sophomore running back Carson Tucker scored a pair of rushing touchdowns to round out the scoring for Valle, which led 45-0 at halftime and never looked back.

St. Pius did get on the scoreboard in the fourth quarter with touchdown runs by Nate Ruble and Connor Hardin.

Valle Catholic wins its eighth straight I-55 Conference championship while improving to 9-0.

The Warriors will be hosting Doniphan in the first round of the Class 3 District 1 playoffs.

St. Pius drops to 3-6 and will head across town next week to face Jefferson in the first round of the Class 2 District 1 playoffs.

You’ll be able to hear that game the night before Halloween on AM 1400 KJFF.