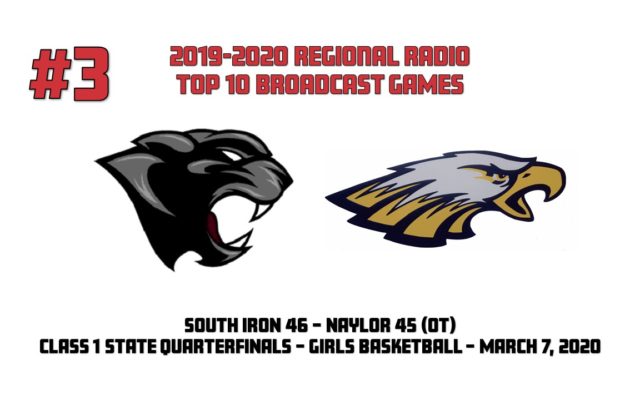 (Van Buren, Mo.) If you have been paying attention to any of our Regional Radio basketball coverage over the last few months, you’ve heard about the South Iron Lady Panthers more than a few times, and rightfully so.

This season they went 25-5, won their fourth-straight district title and made it to the semifinals of the Class 1 state tournament for the second time in four years. Their four year run has been nothing short of legendary.

However, it didn’t come without bumps in the road. One of those bumps turned into a massive victory as they defeated the Naylor Lady Eagles in the Class 1 Quarterfinals 46-45.

Coming into the game against Naylor, South Iron had defeated Norwood in the first round of the state tournament, but just scraped by 47-45 after a game winning steal by freshman Madison Ayers. Coach Graves and company knew their work was going to be cut out for them as Naylor was one of the best defensive teams in the state.

Madison Ayers picked up right where she left off against Norwood and got the scoring started against Naylor after the Lady Panthers gave up five straight points.

The first half was fairly even with both teams grabbing a share of the lead multiple times, but Michaela Ayers was able to push the Lady Panthers ahead at the break.

South Iron would hold a 22-20 lead at the midway point. Both teams went ice cold in the third quarter, but South Iron was able to extend their lead early in the quarter.

Naylor would make a charge of their own and retake the lead 28-27. However, freshman phenom for the Lady Panthers, Madison Ayers didn’t let that lead stand for too long.

Faith Sullivan would knock down a free throw to knot it all up at 29 and head to a fourth quarter for the ages.

At the time South Iron was the #3 ranked team in Class 1 while Naylor was close to receiving votes in the poll. However, the Lady Eagles didn’t care that their wasn’t a number in front of their name as they started to take over in the final quarter.

As the clock wound down, Naylor was starting to feel it and this three by McKenzie Crofford sent the Lady Eagles fan base into a frenzy.

Naylor lead by four with 36 seconds to play and all the momentum on their side. However, South Iron has a player named Michaela Ayers.

Michaela is a very good basketball player, and she wasn’t quite ready for her season to end.

South Iron was able to foul quickly and send Naylor to the line. The Lady Eagles converted both free throws, but it didn’t matter. Michaela had fire in her eyes and she wasn’t losing this ball game.

Ayers finished with a game-high 25 points and none bigger than those two triples to send the game to overtime. South Iron and Naylor went to the overtime period knotted up at 42 each and points were hard to come by in OT.

Eventually, Naylor found themselves leading again with minimal time left on the clock.

This time it was the younger Ayers stepping up after she was fouled driving it to the bucket. Madison was a 53% free throw shooter and had a one and bonus opportunity to send her squad to Springfield. She did just that.

After the game we asked head coach Lawrence Graves if he drew up the two plays for Michaela to knock down the triples, and of course he did, but he explains it in a little more detail.

The senior hit two big ones, but then the freshman was able to hit two bigger ones in the end.

South Iron would move on to play Platte Valley in their semifinal match up and ended up falling 43-34 to end their historic season at 25-5.